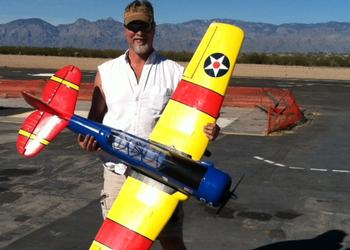 My name is Stan Erwin, founder of Screaming Eagle RC.  I have been building and flying Radio Controlled aircraft since the summer of 1981.

I grew up in metro Atlanta, GA participating in several RC modeling clubs. I had and still have a passion for building and flying models.

Like many others just getting started in RC modeling, I started with a simple Trainer kit, a Carl Goldberg Eaglet 50  which I constructed and flew successfully. However,  I didn't do it alone... I had the help of experienced old-time modelers who were eager to help a newbie into the sport.

Once I soloed,  I mastered the art of flying  and quickly moved into different areas of modeling, different aircraft and competition.

War Birds and Speed planes were of special interest and are still at the top of my list.

In 2005 I became interested in RC Combat and had the inclination to develop a more durable combat plane. The result was the "Skull Bandit". The Skull Bandit was designed for Open "B" combat and works equally well with Limited "B" class RC Combat.

Thank You for visiting!

I look forward to hearing from you!